I was trying to mentally go through my routines the other day.

I’ve been dancing them on occasion in my “dirt studio,” but I can’t move freely or fully other than super slow motion, and dancing in sneakers is like wearing clown shoes. Use the inside edge of a clown shoe? Ridiculous. There’s a big, wide heel and rounded ball of foot that’s nice and cushy but terrible for precision. Dancing Ballroom on sandy dirt and trying not to slide is an approximation. The little dirt patch is made for sliding into Home Plate, not doing double reverse overspin into throwaway oversway while dancing solo. Even so, I imagine, with all my energy, picturing my alignment as if on a dance floor and watching out for deep dips in the gravely dirt.

Two weeks ago I took a really big tumble in Quickstep, dancing fallaway reverse slip pivot into a telemark with a line when my foot went into a big dip in the ground and I went down, hard, on my hip and my hand. 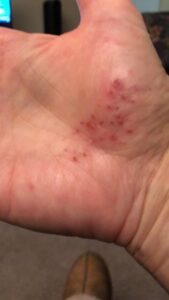 Mental practice has never been easy for me. Although I know people do this, I admit that visualizing the routine hasn’t been something I do in any sort of regular way.

A couple of days ago it was in the upper 90’s and suddenly staying home in the air conditioning and mentally going through my routines was appealing.

I discovered it was possible to go through my routines in two different ways. I’m sure there may be others, but so far: the first is to imagine myself dancing as if I’m an outside observer seeing myself. It was like seeing my holographic body just barely ahead of me in space, dancing through the figures.

Another round of mental practice felt like I was dancing on the inside of that holographic figure, as if I wasn’t quite solid but I was moving through space and my mental image was kinesthetic, from the inside, out. It was more a feeling of dancing from within and not seeing myself from the outside; I was in it.

Both ways worked and I could dance through my routine.

Weirdly and completely unexpectedly, I suddenly noticed all my bad habits. My inner dancing vision was dancing with the faults and flaws I have been working to eradicate and all this was taking place in my mind.

It blew me away.  After all, i should be able to have total control over my own imaginings. I’m the one consciously creating the images!

And there I was, mentally imagining dancing and I had balance trouble in the same places as dancing on the floor in real life.

The holographic me was my invention, therefore I ought to have be able to do anything with her. She could dance as well as my idols, if I want, right?  The only limitations in her movement were in my own mind.

If my inner vision is full of bad habits then it stands to reason that my habits are as much a mental muscle memory as physical, and that begged the question, if I change my mental image pictures of myself dancing, would that then change my physical movement on the floor? How much would it help? Worse; why is it so hard to change my inner visualization?

One thing is sure; they’re connected.

Is my mental function of being able to imagine my own movement, generated in some way by muscle memory of actual movement rather than my will to see and to create a moving image?

How deeply are they entwined?

Could I change my dancing, mentally?

If I do this successfully, will it have a corresponding effect on my dancing when I try it for real?

I had a real practice, stopping and working on organizing my body and pausing with each difficult spot to put in correction and then practice it properly. It was hard work and focused and all of it was imaginary.

I used some Alexander thinking to pause and internally change the organization of her body – my body – the hologram’s movement – in the places she-or-I, was off. It was as if I was trying to feel inside the projection of my imagination so that my kinesthetic thinking could bring about changes in something that doesn’t even exist outside my mind. Wild.

That was a couple of days ago.

This afternoon I tried dancing in my kitchen, in present time on my real feet in real life. The kitchen is narrow and the one wider area is very short. After dancing one or two figures, I must turn around and dance in the opposite direction.

No matter. I sorted out a problem I’ve had about projecting my sternum forward but my body-mind confuses it with going upward. I cleared it up after the mental practice like suddenly seeing a blind spot that of course I couldn’t see before because it was a blind spot; by definition you don’t even know it’s there. It’s like a mental yellow yield sign* in the body.

I found the mental practice fixed some problems. I suddenly understood where my head weight needed to be in a turning chasse and how some angles began in the figure before, but more, where the projection for them begins in my body. Dancing as a mental practice helped me see-feel them in my body-mind. Now on my feet in the kitchen, it translated from mental image to physical expression.

It’s very cool. Stay tuned for more about this mind-in-movement Alexander Technique that I teach and explore in my body in dance. 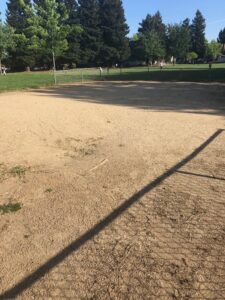 See you Dancing!   Yes, we will dance!

P.S. Please join my blog and do stay in touch – I will send a sweet little collection of ideas to help the body-mind as a gift when you join.

* What color is a yield sign? Did the word, “yellow,” pop into mind? If so, I challenge you to find a yellow yield sign and send me a picture.  I had the same yellow image, myself, till reality suddenly became visible. Could we possibly have invisible yellow yield signs when we dance?

This site uses Akismet to reduce spam. Learn how your comment data is processed.